Is It Time to Make Up With Emerging Markets?

This article makes some great arguments why investors should not give up on emerging markets. Many of these economies have been in flux, but now the risk and reward ratio may be tilting toward investors’ favor.

The best time to take a vacation can be off-season. There aren’t big crowds of tourists and prices tend to be cheaper. The same may be true for investing in emerging markets in 2016.

A welter of worries about the slowdown in the emerging world, led by China, sapped investor appetite for risk and drove a stampede out of emerging markets. In fact, emerging stocks and bonds have been out of favor ever since the “taper tantrum” of 2013 marked the start of markets weaning themselves off ultraloose U.S. monetary policy. 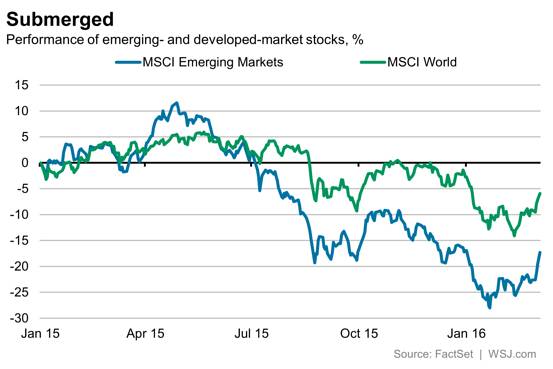 Yet even as money has fled from the asset class, there have been some startling returns on offer in niches of the market. In 2015, Russian corporate bonds denominated in dollars returned 24%; they have tacked on another 2.8% this year.

The start of 2016 has offered further signs of a shift. Among 42 benchmark global financial assets tracked by Deutsche Bank, Brazil’s Bovespa and Russia’s Micex, stock indexes rank in the top five to the end of February—up in both local-currency and dollar terms. Emerging-market currencies have found some stability against the dollar. Local-currency bonds are in positive territory too…..

RICHARD BARLEY
< Previous Next >
We use cookies to ensure that we give you the best experience on our website. By continuing to use this site you are giving us your consent to do this.OkRead more