Welcome to our world, Meghan.

Meghan Markle’s marrying a prince may be an unusual situation, but her tax issues are very common for a large number of our clients!

Congratulations on finding your Prince Charming! I don’t want to be the bad fairy at the festivities, but we need to have a serious talk about taxes.

Meghan, I know you lived as a U.S. citizen in Canada and may be aware of tax issues faced by the seven million or so Americans living abroad. And I know you’re committed to Harry, because you’ve given up a lot since you two became serious, including your lucrative acting career and your lifestyle website.

But I don’t think you know the tax torment many American expats face when they marry non-U.S. citizens—as you’re about to do. Nearly every financial move they make, and other moves they don’t think of as financial, raises a U.S. tax issue.

In your case, this means that if Queen Elizabeth II gives—or merely lends—you a tiara or a diamond bracelet, you may need to tell the Internal Revenue Service about it. Your share of the free rent for that cute cottage at Kensington Palace where you and Harry will live? Its value could be reportable to the IRS as well. If you have a credit or debit card tied to Harry’s bank account and it has more than $10,000, his account has to be reported to U.S. authorities.

To be sure, wearing the tiaras and living at the palace won’t necessarily raise your U.S. tax bill. But the penalties for not making the proper reports to U.S. authorities are often severe and can be as much as half the total assets in an account.

And you would actually owe tax on the value of benefits from assets that are held in a certain type of trust, at rates up to 37%. Lots of royal assets are held in trust, so Ms. Mehany thinks the royal family will need U.S. tax experts to comb through the trusts to deal with these issues.

Now, you may be wondering why the U.S. tax system intrudes so far into expats’ lives. There are many reasons, but a big one is that the U.S., unlike most countries, taxes citizens on their world-wide income even if they live abroad. Therefore, almost no income is out-of-bounds. 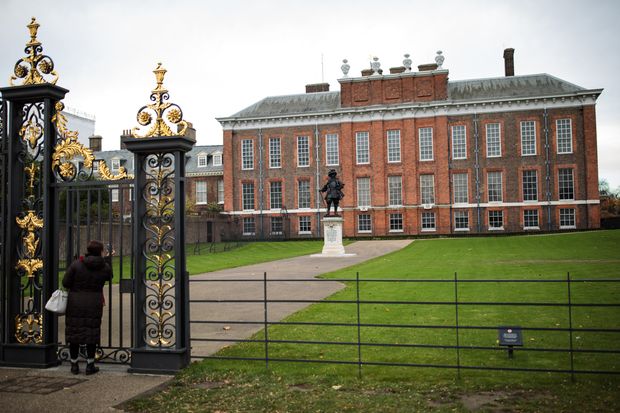 The royal couple will live in a cottage at London’s Kensington Palace. PHOTO: JACK TAYLOR/GETTY IMAGES

Another is that U.S. tax laws on foreign income and assets are a crazy quilt of provisions that have accreted over the years, often in reaction to abuses. “It’s almost as if the government assumes that Americans abroad are guilty until proven innocent,” says Philip Hodgen, a tax lawyer in Pasadena, Calif., who also advises international private clients.

These tax rules lead to strange results. For example, Australia requires all workers in the country to have retirement accounts, even if the workers are U.S. citizens. Yet U.S. tax law treats these accounts the same as offshore trusts set up by shady schemers. The IRS reporting for them is insanely complex.

These laws are also why gifts or loans of jewelry from the queen could present U.S. tax problems. Unless an exception applies, the fair-market value of loans or gifts to a U.S. citizen from a foreigner needs to be reported to the IRS when the total exceeds $100,000 per giver annually.

If the queen provides benefits to you via Harry—such as a vacation at a castle—the IRS can attribute them to her.

Is this frightful complexity prompting you to consider renouncing your U.S. citizenship? Thousands of expats have done so since 2009, when revelations about U.S. citizens holding secret Swiss accounts prompted a crackdown by Congress and the IRS.

But a royal spokeswoman told me you won’t receive U.K. citizenship for “a number of years,” so you will have to deal with the U.S. tax rules at least that long.

Renouncing U.S. citizenship also comes with a price. Renouncers who have more than $2 million of assets, as you seem to have, owe an exit tax on their net capital gains in assets such as a house or stock portfolio, even if they don’t sell the assets. You would also owe tax on the amount in a traditional IRA at the rates imposed on ordinary income.

What’s more, your name would be published on a list of renouncers. Once you have given up U.S. citizenship, it’s hard to get it again.

The upshot: You and Harry may soon feel the IRS is a third partner in your marriage. Well, marriage is always an adventure. Good luck and all happiness!

Write to Laura Saunders at laura.saunders@wsj.com

< Previous Next >
We use cookies to ensure that we give you the best experience on our website. By continuing to use this site you are giving us your consent to do this.OkRead more